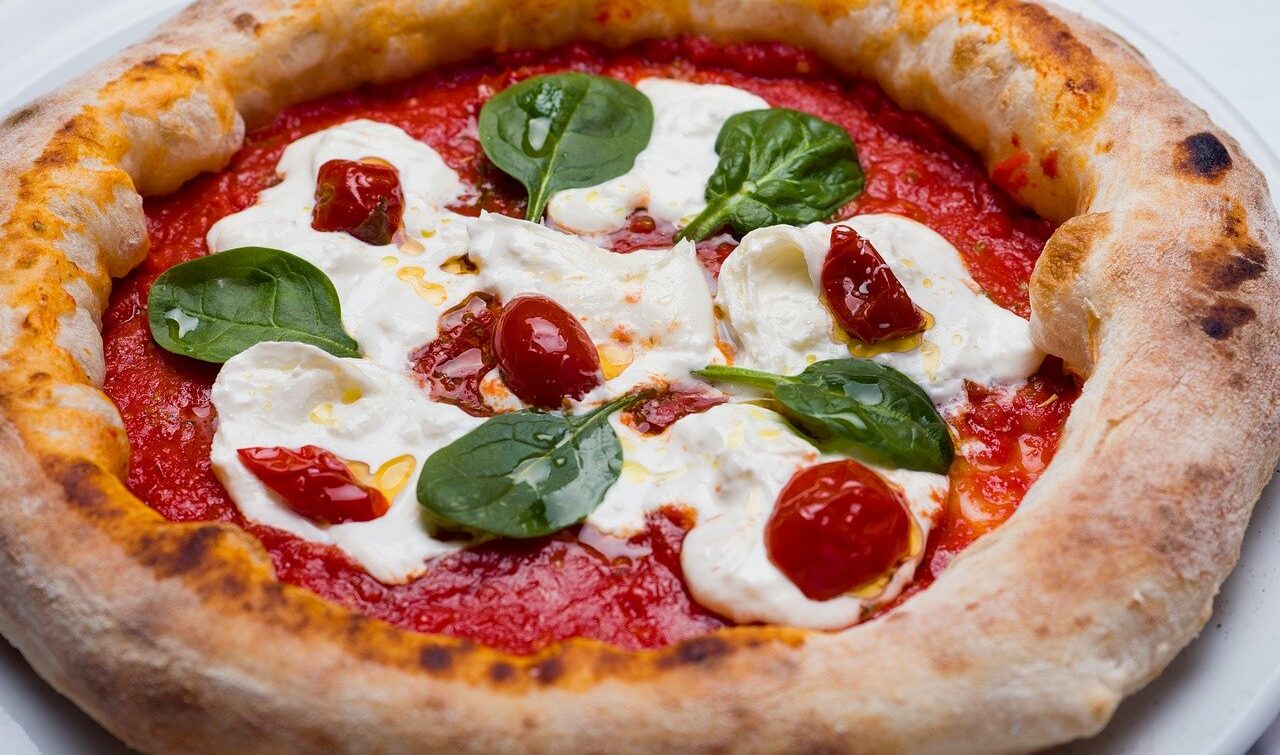 The Origins of Pizza

It can be said that pizza is the most popular dish in the world and, certainly, one of the most popular. The pizza itself has very ancient origins and the hypotheses regarding its geographical origin and the etymology of its name are numerous and still very uncertain today. What is known for sure is that it is in Naples that this dish has reached excellence, making today "pizza" and "pizzeria" the most well-known Italian words in the world, and that pizza has become a real own symbol of the city. Although today there are many different toppings, what we identify as the true and artisanal Neapolitan pizza was certainly born after the eighteenth century, that is, after the use of tomatoes in the kitchen, vegetables that, imported from the Americas, became popular and widespread. at the beginning they were considered very harmful. Tomatoes are the fundamental condiment for the preparation of real pizza, present together with olive oil and oregano in Marinara and olive oil, mozzarella and basil in Margherita, the tricolor pizza invented in the 19th century in honor of Queen Margherita of Savoy. Certainly, in addition to the authenticity of the ingredients of the dressing, the ingredients of the dough are fundamental: water, fresh brewer's yeast and sea salt, which must be carefully worked and then left to rise for the first time. The forming and the staglio is followed by a second leavening, which precedes a further processing phase, during which the pizza is flattened and seasoned and, finally, cooked in a wood oven. That of the preparation of true pizza is considered a real art, of which, beyond the geographical origins, the city of Naples has earned the paternity.

How do you prepare a True Neapolitan Pizza?

According to the original recipe as handed down by generations of pizza makers, the final appearance of the real Neapolitan pizza after cooking in a wood oven must respect the following rules:

The ingredients to prepare the dough of the real Neapolitan pizza, compared to 1 liter of water are the following:

Flour, water, salt and yeast are mixed, starting from the water, making sure that direct contact between salt and yeast does not occur for more than 5 minutes, otherwise the salt would damage the yeast cells. Pour a liter of water into the mixer, dissolve a quantity of sea salt between 40 and 60 g, add 10 % of the flour compared to the total quantity provided, then dissolve the yeast, start the mixer and the rest of the flour is gradually added until the desired consistency is reached, defined as the dough point.
The dough must be worked in the fork, spiral, plunging arm mixer (all with rounded corners and rotating basket) until a single compact mass is obtained.
To obtain an optimal consistency of the dough, the amount of water that a flour is able to absorb (hydration) is very important.

The dough, once extracted from the mixer, is left to rest covered with a damp cloth so that the surface cannot harden, forming a sort of crust caused by the evaporation of the humidity released by the dough itself.
After the time deemed necessary to settle and rest the dough, the dough is molded, traditionally done by hand.
In the Neapolitan technique, in the traditional hand staglio, the dough is shaped (staglio) in the form of balls with a technique that recalls the preparation of mozzarella (mozzatura).
For the "true Neapolitan pizza" the loaves must have a weight between 200 and 280 g, to obtain a pizza with a diameter between 22 - 35 cm. Once the loaves have been formed (staglio), a second leavening takes place in food boxes of varying duration, depending on the temperature and humidity characteristics of the environment and the absorption of the flour used.
Maturation consists of a series of biochemical and enzymatic processes that break down the most complex structures, proteins and starches into simpler elements. Overall fermentation times: min 8 - max 24 hours (with the possible addition of processing hours - max 4 hours).

How to roll out the pizza

With a movement from the center outwards and with the pressure of the fingers of both hands on the dough, which is turned over several times, the pizza maker forms a disc of dough so that in the center the thickness is not more than 0.25 cm with a tolerance allowed equal to ± 10 %.

The products used must preferably be of Campania origin.
The hand-crushed peeled tomato must be not dense and with pieces still present.
Fresh tomatoes should be cut into wedges.
The buffalo mozzarella (cut into slices) or the fior di latte (cut into strips) must be evenly distributed.
The grated cheese (if used) should be spread on the pizza with a uniform and rotating motion.
Fresh basil leaves are placed on the seasonings.
The extra virgin olive oil is added with a spiral movement.

Cooking must take place inside a wood-burning oven which must have reached a temperature of about 430-480 ° C between the stalls and the vault. With these temperatures it is sufficient to insert the pizza for 60-90 seconds, in which the pizza will cook evenly over the entire circumference.

Posted in:
Recipes
Tagged:
flour 0, flour 00, extra virgin olive oil
Leave a Reply Cancel reply
Recent Articles
Archive
stay in contactSubscribe to our Notifications
Chat Now
Click below to chat on Whatsapp
We typically respond within minutes.
You have to accept ours first privacy policy to start a conversation.
Customer care
Andrea P.